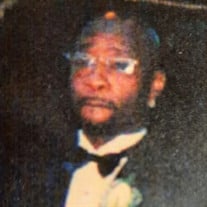 In Loving Memory of Raymond Paul Brown (known as "Yogi") Raymond left behind a wife Marnisha Brown, four children, Maurice, Bryan, Benjamin and Marvina Brown, and a host of family and friends. Raymond's parents, George T. Jones and Marvina Jones preceded him in death, also his eldest brother Robert Brown. Raymond leaves behind his eldest sister, Barbara Freeman and her husband Malkie Freeman, also a brother Jerry Brown, a sister Judy Roseman, a brother Michael Brown, along with sister, Robin, and her husband James Brooks, and Renee Jones. Comments from family: Jerry Brown: Shared a funny story about how he gave Yogi a sock full of silver dollars and Yogi ran with that sock, so no one would take it back and everyone began to laugh, because no one could catch him! Judy Roseman: Recently I experienced Yogi's joy seeing how Yogi was trying to make his life right with Jehovah. He knew life was very short for him, but he came to grips to find peace in his heart. He appreciated the scripture at (John 17:3) which helps one to realize what they must do to gain everlasting life. Michael Brown: Yogi, down to the end seemed to be at peace with Jehovah and now we don't have to see him suffer anymore, he has the same hope our parents had of the resurrection (John 5:28, 29) Robin Brooks: From Robin and Cammie, we ask Jehovah to give our family the strength and guidance and peace knowing he is just resting until "Jesus" calls him out of the memorial tomb. (John 5:28, 29) Renee Jones: Yogi, (Raymond) Thank you for allowing me to care for you. We talked, laughed and cried together. When you awaken according to (John 5:28, 29) I'll be waiting to cry tears of joy with you, laugh hysterically, and talk forever. (Revelation 21:3,4) will be missed until I see you in paradise. Malkie & Barbara Freeman: Malkie loved Yogi, as a little brother and seen some changes in his heart down to the end. He and Yogi enjoyed reading the daily text from the scriptures each morning from the Bible. He said this brought him closure and peace. Barbara: I loved my baby brother very much and I too! seen how he came to be at peace with himself because of knowing the hope in the Bible where Jehovah will wipe tears from his eyes and death will be no more (Revelation 21:3,4) a scripture that helped Yogi to come to peace too. (Isaiah 41:10) when Jehovah, God said he had Yogi by his right hand. You will be missed Yogi. And his parents' favorite scripture for Yogi was (3rd John:4) says, No greater joy do I have than this, that I should hear that my children go on walking in the truth. A Zoom service for Raymond "Yogi" Brown will be on Saturday, November 27th at 2:00 PM. Use Zoom #798 708 7261 pw: 21971

The family of Raymond Paul Brown created this Life Tributes page to make it easy to share your memories.

In Loving Memory of Raymond Paul Brown (known as &quot;Yogi&quot;)

A comforting word from you means a lot.

Send flowers to the Brown family.